I can’t remember a time when I didn’t love to write. When I was a kid, I used to write stories on the scratch paper my father brought home from his office. I wrote about talking pillows and magic spells and whatever else my imagination conjured. In school, I took the first opportunity that came along to enroll in an actual writing class. It was seventh-grade journalism, and I remained involved with newspapers one way or another for the next 40 years.

I grew up in Southern California, in one of those suburban housing tracts that sprang up after World War II to meet the needs of young veterans starting out in their new civilian lives. My father was such a veteran.

I went to several colleges, thanks to fluctuations in our family finances and my oft-changing educational goals, and graduated from California State University, Long Beach with a degree in journalism.

Some years later, parenthood gave me a new direction: I wanted to write children’s books.

A word about that, while I’m on the subject. Writing children’s books takes a lot of work. Don’t believe what you see on TV or in the movies, where someone pulls out a yellow legal pad, scribbles a story about some cute animals, mails it out, and receives a fat check from a publisher two weeks later. It doesn’t work that way. (Celebrity authors are a whole different story – but that's a topic for another day.)

My first three books, published in the 1990s, were nonfiction for high school students. They won recognition from the New York Public Library, the Child Study Council, and the Society of School Librarians International. Then I turned to what I really wanted to do, which was write fiction. Happily, that worked well too. My first novel, a mystery for 8- to 12-year-olds, was O’Dwyer & Grady Starring in Acting Innocent. It was nominated by the Mystery Writers of America for a 2003 Edgar Allen Poe Award. I followed it with a sequel, O’Dwyer & Grady Starring in Tough Act to Follow.

The other thing parenthood led me into was school volunteering. I spent countless hours peddling pizza, chaperoning field trips, proctoring tests, you name it. But I was also able to bring my journalism and writing experience to school. In addition to giving presentations and conducting writing workshops, I shepherded and advised an elementary school student newspaper for two years, then launched a middle school student paper and led that for three years.

I recently finished up a novel for teens; it had to sit on hold while I went to grad school. After an exciting and challenging three years, I finished school with a master’s degree in English, concentrating on British and American literature. From time to time, I've dabbled in community theatrical ventures, a longtime love of mine. And I do a variety of freelance jobs: writing and editing, leading residencies and camps, teaching, and producing audio projects. In 2011, I received my Certificate in Documentary Arts from the Center for Documentary Studies at Duke University. My specialty is audio, and I did my certificate project on a comedy improv troupe called Raleigh’s Village Idiots. I also enjoy interviewing authors. Check out my piece on Luli Gray, the late author of the acclaimed middle grade novel Falcon's Egg. And here's my 2012 chat with Kelly Starling Lyons, a rising star and author of the Jada Jones chapter book series.

I live in Raleigh, N.C., with my brilliant husband and our two sweet rescue dogs.

I look at the world and the people in it, and I see stories everywhere just waiting to be written. That’s the outlook I bring with me when I visit schools and lead workshops – so I can help students open their eyes to the fun they can have when they sit down to write. 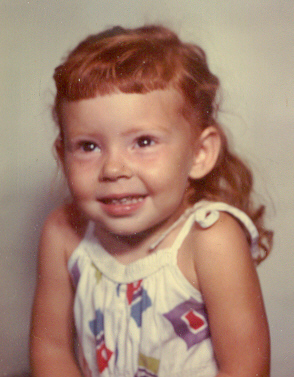 I'm about 2 years old in this photo. It's possible that I hadn't started writing yet at that time.

Second grade. By this time, I was reading like a fiend. My favorite day was when the Bookmobile arrived at my school. That little library on wheels opened a great, big world to me.

Fast forward to 2006: I'm teaching students at Millbrook Elementary in Raleigh how to create a rounded, believable character.